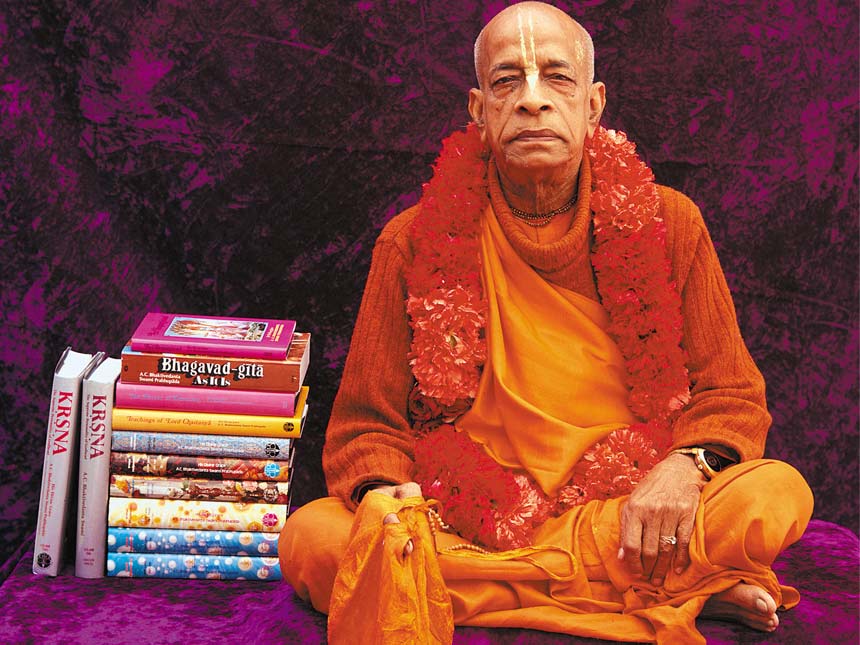 Srila Prabhupada met his spiritual master, Srila Bhaktisiddhanta Sarasvati Thakura in Vrindavana. In a private meeting Srila Prabhupada’s spiritual master told him in 1935, “I have a desire to print some books. If you ever get money, print books.” Srila Prabhupada always stressed this point and with the help of his disciples he published many books in English which includes the commentary on Indian classics like Bhagavad-gita, Srimad Bhagavatam and Chaitanya Charitamrita.

The Krishna Consciousness Movement is firmly based upon the conclusive truths found in the books of Srila Prabhupada. Bhagavad-gita As it is, Srimad Bhagavatam (Canto 1 – 9 and 13 chapters of Canto 10) and Sri Chaitanya Charitamrita are the three major texts that contain the essence of Vedic knowledge. Srila Prabhupada also wrote a commentary on Sri Isopanishad, the most important of the 108 Upanishads. He wrote Nectar of Devotion, a summary study on Srila Rupa Goswami’s Bhakti Rasamrita Sindhu and Nectar of Instruction, which contains the purport to Upadeshamrita, the 11 verses written by Srila Rupa Goswami to guide the beginners in Krishna Consciousness.

He also wrote many other small books like Easy Journey to Other Planets, Message of Godhead, Teachings of Lord Chaitanya, etc. The compilations based on Srila Prabhupada’s articles, lectures and conversations are published with titles such as Science of Self Realization, Journey of Self Discovery, Quest for Enlightenment, Renunciation through Wisdom, etc. Other interesting collections from the conversations of Srila Prabhupada are Perfect Questions, Perfect Answers, Civilization and Transcendence, Beyond Illusion and Doubt, Life Comes from Life, etc.

Over the years, hundreds of scholars who read his books have expressed keen appreciation for the contribution his teachings have made to humanity.